- May 25, 2017
One of my brothers has recently bought a new house and inherited a mature garden that contains a lot of slate chippings - this is quite unsuitable for my two young Nephews who are into everything, love picking things up throwing and/or popping items in their mouths!

When we were asked if we could do anything with the slate we were more than happy to take it off their hands and they were delighted too - cue several journeys across the West Midlands - more of which are yet to come.

Having had a good think about it I have decided to create a new planting border along the circumference of one of two circular lawn areas. (I will upload an illustration of the complete garden layout when time permits.)

This is quite a sunny spot in the summer months so we have chosen mainly evergreen plants that will do well in this aspect and that will eventually form neat mounds.

I have chosen the bright green Euphorbia polychroma that we spotted at Coughton Court last month, a gorgeous orange Heuchera marmalade, a green and white hardy Geranium macrorrhizum White-ness (aka Mount Olympus) and a variegated Carex oshimensis Evergold to add a touch of drama and height. 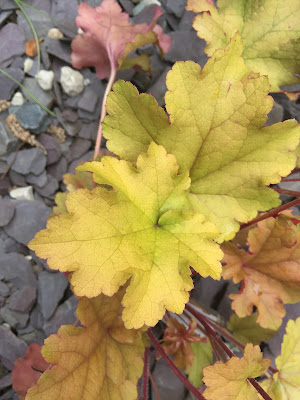 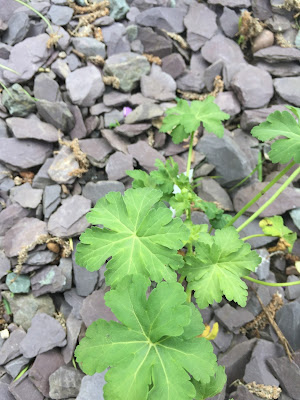 I love the combination of the foliage of Geraniums alongside Heuchera's.  I think the overall shape, the ruffled edging and the vein pattern of their respective leaves make a very good partnership in a low-maintenance garden border, and there are so many to choose from.  I have also been after a hardy Geranium for absolutely ages as they appear to be in every cottage garden border we have visited recently and are a great choice for ground cover.

In addition I have added a Chilean guava Ka-Pow which promises to do well and bring a sweet scent and tasty fruit in  the Winter.

The slate will act as a mulch to retain moisture in the soil, improve drainage, reduce weeds and control plant growth.  It also brings the planting scheme together with a common and masculine theme. 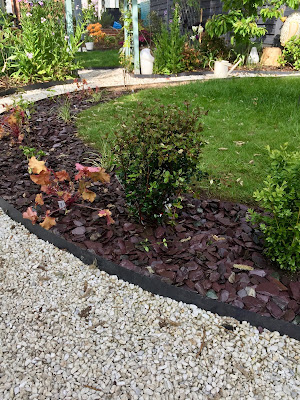 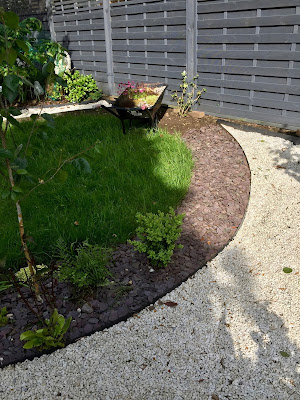 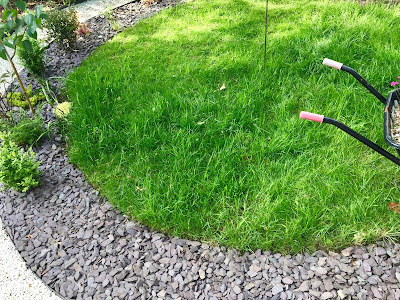 It's all looking quite promising, I love that contrast between the grass, the purple/grey slate and the off-white gravel it just brings an extra dimension to the garden.  It also looks very effective alongside the charcoal edging and the dark grey fence panels - we just need those plants to establish and pop now!
Design Plants Projects