- June 17, 2018
Today at the recommendation of a work colleague, (thank you Andrea) we visited Preen Manor in Shropshire.  It was a bit of a drive to reach our destination which seemed to go on for ages and involved lots of ups and even more downs via some windy country roads out in the middle of nowhere.  I'd like to take this opportunity to thank our Tomtom for getting us there in one piece.


My partner loathes tardiness so obviously we arrived far too early having overestimated the journey time.  We were first mistaken for volunteers and directed to the staff car-parking space (yes, we really were that early) and when the error was noticed by a man in delightful tweed, flat-cap and wellington boots we were taken to an enormous empty field.  All we had for company was an empty Landrover  several strategically placed cow-pats and the most amazing view over the farmland and out towards Wenlock, Bridgnorth and the Shropshire countryside.  We waited in our inappropriately equipped city car for a more opportune time to enter the grounds wishing we had brought a picnic.


Nearer the opening time we made our way on foot up the road through some lovely woodland to the entrance where we were greeted by some frightfully posh and happy people who appeared overjoyed to see us, paid our reasonable fee (all goes to charity!) and entered the grounds. 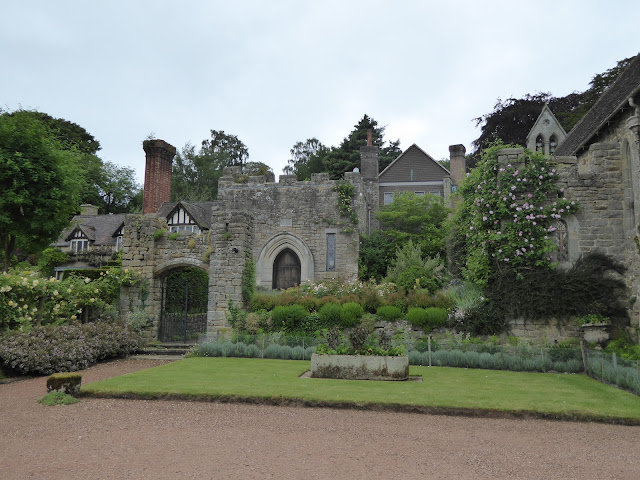 Being the first there we were able to take some clear photographs.  The one above shows the manor house building that now stands on the site. The remains of the 18C mansion can be seen with the square chimney to the left.  I'm not sure what the older bits are in the foreground - maybe someone could tell me.

The parish of  Church Preen where this building is located has a minuscule population of < 100 so it really is in the middle of nowhere.  The information sheet we have been handed  tells us that there has been a building of some sort on this site since the 12C and a 13C church remains.  We found that the mishmash of different architectural styles remaining did not detract its natural beauty. 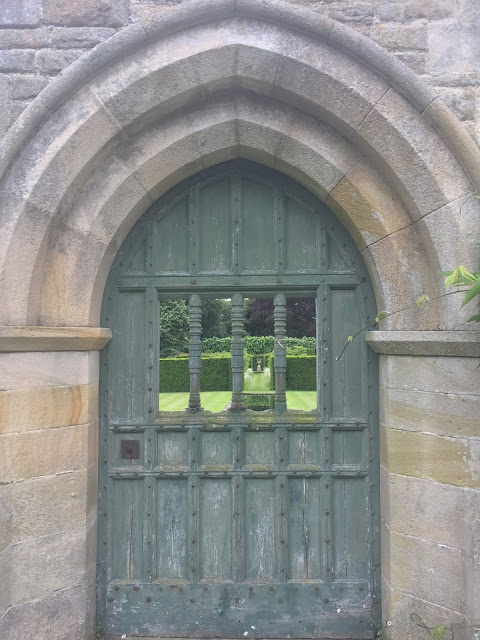 The information sheet tells us that the garden was a labour of love for 35 years and is now owned by another family.  Two other gardens that we have not had the opportunity to visit yet (Sissinghurst in Kent and Hidcote in Gloucestershire) inspired the garden design. As we entered through a gate we were happy to be making a new journey of discovery into the unknown.


There was plenty to see and many areas to explore, the perfect acute triangle of variegated Hostas marking the far corner of the Old bowling green garden stood out.

It was clear that we were not the only ones enjoying ourselves.  As the spaces within the garden began to get busier we caught smiles and bemused glances from other visitors. People stopping to take in a particular view and chatting enthusiastically about something they had seen.  A small lead window within a stone folly caught our attention whilst above our head hung a rather camp bird-cage.  Anything with rainbows and felines, gets the thumbs up from me, definitely two of my favourite things.  When I look up at rainbows in the sky they remind me of a friendship I had with a lovely man who is sadly no-longer with us so this made me smile.   A sense of playfulness exists in this garden as it has done in so many other gardens we have visited.  The Lion being a prime example of this here and a complete surprise too.

My other half was drawn to the unusually laid out kitchen garden (middle photo below).  Its zig-zag dividing brick walkways between the different plots were unique and something we had not seen before although I did think that it could possibly have victorian origins.  It also felt private and secluded surrounded by hedgerows.


Later we partook in some coffee and cake in the stables courtesy of some local ladies. The choice of sweet delights was phenomenal, there was even a vegan chocolate cake that I shovelled down the hatch. We had a conversation about what draws us both to gardening, allotmenteering and garden visits. There were also some plants for sale, but I held back and was really good for a change.

Outside in the church grounds an English Yew declares itself as the oldest in Europe, the sign proudly states that it was planted in 457AD!


This was a lovely recommendation and I am really glad we made the extra effort to get there. I in turn heartily recommend it to you if you are reading this.  As we made our way back to the car the field had filled up with vehicles tightly packed in so this one is very popular and we can see why.
Visits