- February 15, 2016
We have cut down the Crab Apple tree, it was half-dead and the root system had rotted. The large Leyland Cypress coniferous trees that we removed earlier had blocked so much light and drained so much water and nutrients from the soil that it was difficult to sustain any plant development close to them.

We counted the rings from them and estimated that they had been in the garden for at least 40 years.

We have replaced the Malus with a Pergola Arch so that we can grow climbers such as Wisteria and begin to plan the overall garden design. 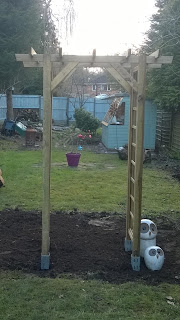