- November 23, 2017
Not being one who likes having wet hands, especially during this cold weather, I have been putting off cleaning the pond and fixing one of its borders for several years.  I can't delay the inevitable any longer so am just going to go for it.


The problems we have are varied:


The border plants ledge on one side of the pond is not wide enough.  Aquatic baskets are precariously balanced.  The plants themselves need dividing and repotting.


The oxygenating plants have gone mad and need thinning out.


The leaves from nearby trees need to be cleared out of the water as much as possible. 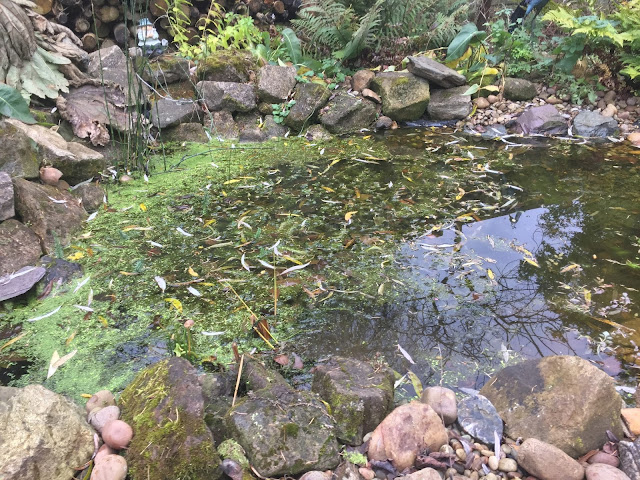 I have read that autumn/winter is the best time to do this as wildlife is at its least active/starting to hibernate.  That said i've seen two lovely slug-eating frogs today beneath the stones that I have been carefully removing from the edge.


I had a genius moment earlier and decided to keep my hands from getting wet by wearing washing-up gloves.  I'm happy to report they worked a treat.


Using a large water-tight container I have removed the pond border plants (Caltha palustris - Marsh Marigold, Myosotis scorpioides - Water forget-me-not and several others whose names escape me) and covered them with rain water from the water-butt.  I am going to leave them there next to the pond until I am able to divide them and reintroduce them.


I have also removed the large rockery stones from the border, waved at two frogs in the process and filled a bucket up with the smaller pebbles.
I have cleared out masses of overgrown oxygenating plants and when the skimmer net arrives can clear the surface of some of the debris.  As this debris slowly rots the nitrogen provides the perfect environment for the dreaded duckweed so its important that we keep on top of it.

Whilst I was down by the pond I took the opportunity to do a bit of weeding and general tidying up around the edges.  Not too much though, its a fine balance as we are going for a naturalistic look.  This is the one area of the garden I can forgive nettles for popping up albeit in small quantities. 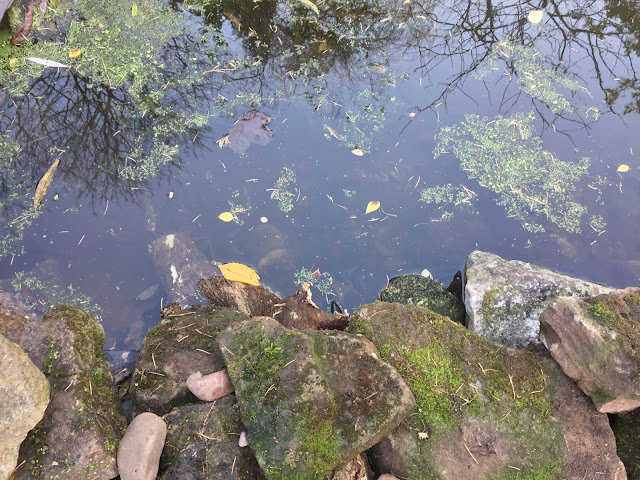 The large edging rocks have been replaced and a log added to enable access in and out of the water at this deep end.  The plants will be repotted and reintroduced once these little beauties arrive.

This time i'm going to follow RHS advice and line them with hessian.  This is in addition to the usual grit in the base and top to stop the aquatic compost bleeding into the water.  The grit also provides some necessary weight to stop movement once submerged.

We have introduced a native and less rampant oxygenator too with Ranunculus aquatilis (common water crowfoot) and plan to obtain Hippuris vulgaris (water mare’s-tail) and Hottonia palustris (water violet) in the near future.